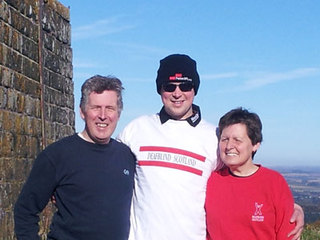 Three of our employees pushed their adrenaline to the limit in action-packed challenges to raise thousands for charity with the Southern Reporter praising their efforts.

The fundraisers abseiled the Waterloo Monument at Penielheugh, took aim for a day in a 24-hour archery shoot, and cycled nearly 200 miles to raise money for Deaf Blind Scotland, M.S. Scotland and the Bubble Foundation, a specialist unit in Newcastle for babies and children without an immune system.

Mr Armstrong said: “I was slightly nervous in the run-up to the abseil, but the fact that my aunt, who is partially sighted and deaf, was nothing if not excited, made me man up a little.”

The monument near Ancrum was designed by Archibald Elliot, a member of the Elliot clan, a rival clan of Niall’s ancestors the Armstrongs.

He said: “It was fascinating to discover the personal family history which linked us to the monument and quite exciting to think that all these years on a clan of Armstrongs successfully infiltrated and descended the tower.”

Panton McLeod’s team leader Paul Hogarth helped organise and complete the 24-hour archery shoot at Eastcoat Archery Centre, near Hawick, in August to raise £1,000 for M.S Scotland. He and five other archers walked 27 miles and shot more than 875 arrows between them.

Mr Hogarth said: “Although I was initially daunted at the prospect of shooting for 24 hours straight, the total that we raised was well worth it, even though I was exhausted by the end! I am very excited to have taken part as I think it is a hugely worthy cause and I hope to continue using archery as a way to raise funds for M.S. Scotland in the future.”

The company’s sales and marketing director Paul Henderson biked the Borders Reivers Trail across the north of England and the Borders in three days with friends to raise £350 for the Bubble Foundation.

Mr Henderson said: “I had wanted to do a charity cycle for a couple of years but hadn’t had the opportunity, so after hearing a group of friends were doing the Reivers Trail, I jumped at the chance. Seven of us completed the route and it was a tough three days, but when you’re pushing yourself for such a good cause it makes it completely worth the while and I felt a huge sense of achievement once I’d completed it.