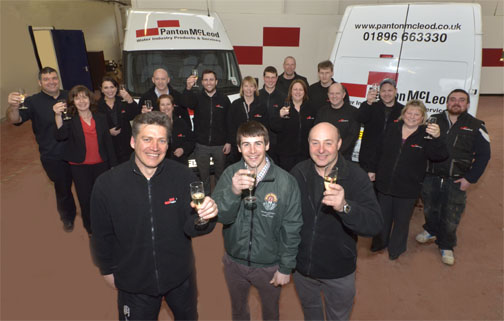 As Grand National winner Ryan Mania received a hero’s welcome in his hometown with a victory parade, he has given his proud father extra cause for celebration.

His father Kevin Mania, an employee of Borders based firm Panton McLeod, learned that his colleagues collectively scooped over £10,000 after placing bets on Ryan’s race to victory in a pledge of faith despite being rated as a 66/1 outsider.

Kevin, Operations Technician at Panton McLeod, said: “Seeing your son scooping the Grand National title in his first attempt and being the first Scot in living memory to win is one of the proudest moments of my life.

“The support he received in Galashiels was unbelievable. My colleagues rallied behind him and piled down to the bookies to show their support and loyalty which is amazing especially considering the high odds.

“His injury the next day was a real scare and the concern and support that came in from everyone at Panton McLeod was lovely and really appreciated by us all. Thankfully he’s a strong lad and has come away with only minor injuries so could be back in the saddle by this weekend.

It’s an exciting time in Galashiels at the moment; he’s single handily put the community on the map. My colleagues are already hoping he’s going to be fit and healthy to carry on the success and cheer him on at the Scottish Grand National later this month. It’s like having a celebrity around town.“

Around 3,000 residents of Galashiels, in the Borders, lined the streets to toast the 23-year old jockey’s return after he was given the all clear for hospital release following a fall after winning Saturday’s race on 66-1 shot Auroras Encore.

Included in the crowds were employees of Panton McLeod who were equally delighted to see him en route to a speedy recovery and receive such a high level of community support.

Shelagh Briggs, Finance Director at Panton McLeod, said: “Ryan wasn’t actually confirmed to be racing until the Friday but the excitement and support that flooded in last minute here was unbelievable.

“He had high odds but it is a really tight community here and everyone at Panton McLeod wanted to show their support and faith with it being his first race and at the UK’s biggest horse racing event.

“An incredible win regardless of nine lengths ahead of the others but Ryan becoming one of the youngest jockeys to ever win at Aintree just adds to our excitement for him.

“When he took a fall the next day, naturally everyone was concerned and wished him and his family all the best but thankfully he pulled through and fingers crossed he’ll be riding high again at the Scottish Grand National.

“It just goes to show that it pays off supporting the underdog and I hear the Borders bookies took a battering – no doubt thanks to our doing too. People will no doubt be talking about this for months, probably even years to come.”